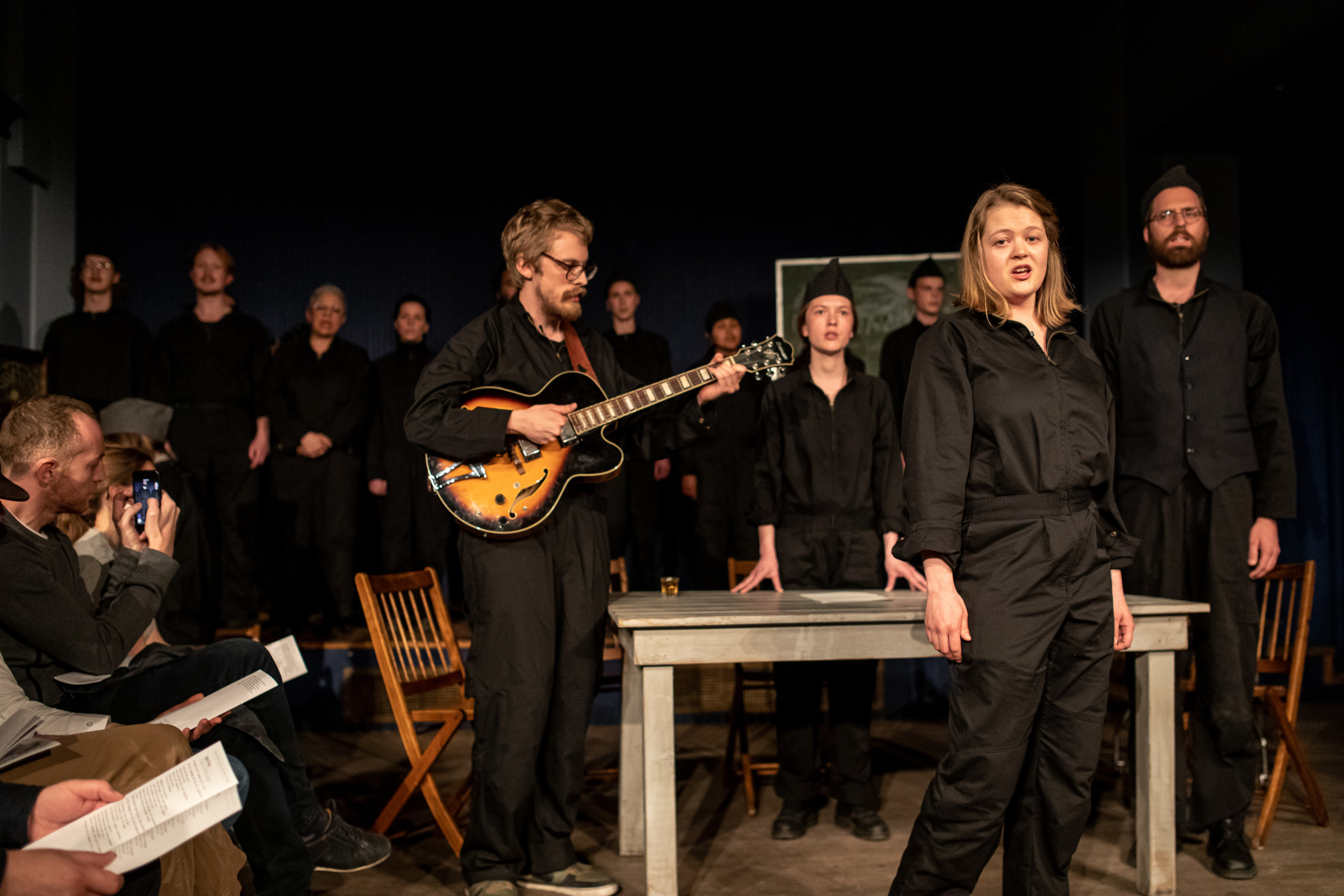 Rose Hammer: Grini and The Futures of Norway, National Episodes, osloBIENNALEN Photos by Niklas R Lello Performance on 26 May at Perlen, Oslo

This second day of the week of Propositions #9 Deserting from the Culture Wars consists of a training with Rose Hammer (Stacey E. Devoe, Dora Garcia, Nora Joung, Per-Oskar Leu, Niels Munk Plum; Oslo), and a public program including the lecture Transfixing Fascist Episteme with Tom Holert.

“THE PLAGUE”  with Rose Hammer (Stacey E. Devoe, Dora Garcia, Nora Joung, Per-Oskar Leu, and Niels Munk Plum; Oslo)
Rose Hammer is an artistic persona consisting of twenty artists that was created as a response to an invitation from osloBIENNALEN to create a work in public space. Rose Hammer aims to escape the logic of the individual artist, becoming instead a transnational, transgenerational, and transdisciplinary persona. The group carefully considers relatively unknown stories at the origin of mainstream notions of identity, nationality, and history, in order to construct a counter narrative, and to present it following the rules of Brechtian agitprop: with explicit, clearly formulated political positions, non-hierarchical dynamics, and a reductio ad absurdum of notions such as professionality, virtuosity, and entertainment. The presentations are always site- and context specific. In this training, Rose Hammer introduces participants to their new project, based on The Plague by Albert Camus and the opera of the same name by Roberto Gerhard. The participants are guided through a classical session of Rose Hammer group work, using as material one of the chapters of the novel/opera, and involving singing, dancing, and dialogue.

This site uses Akismet to reduce spam. Learn how your comment data is processed.

There we go #Trilogy #chapter3 #petroleo #rosehammer
There is no revolution without sexual revolution
Posted @withregram • @oslobiennalen 🌹🔨 The Radical Flu is a radio play created by Rose Hammer. The play aired on radiOrakel from October to December 2020 with 7 chapters and an epilogue. 🌹🔨 ⁠⁠
A letter from Rose Hammer
A wonderful review at scenekunst.no for The Radical Flu 🌹⚒️ "... gjennom The Radical Flu presenteres en vifte av politiske posisjoner (først og fremst fra den politiske venstresiden) og virkeligheter. Og det er sammenstillingen av erfaringer fra levd liv (fra både 1918 og 2020) og teoretiske perspektiver som gjør The Radical Flu til interessant lytting." - Anette Therese Pettersen
Reaching Winter Grounds - the last broadcast of the Radical Flu - on air tomorrow, Thursday 17th December at 12:00 from the studios of RadiORakel in Oslo FM 99.3 - Thanks to the faboulous sound technician Claire for the precious help! Thanks to @oslobiennalen and @khio for the support, thanks to @notam02 for the fantastic job on recording the play, thanks to all the listeners for the love and thanks to @radiorakel for welcoming us in the studios!